On January 14th, 2014, the third and ﬁnal batch of crocodiles, which were captured during the 2013 tilapia cultivating period by Aqua Corporation International S.A. (ACISA), were released into the wild. The project started late November 2013 with the ﬁrst release, and an additional release took place in December of the same year. Each release of captive crocodiles was carried out over a period of 15 days to minimize the effect of returning a large number of crocodiles into the wild at one time that had been captured over the course of a year. The practice of identifying crocodiles by cutting off selected scales and scale ﬂows has ended. This method proved to be an ineffective way to identify the animals, as cited in documents arguing against its utilization in the Guanacaste area. A new, advanced method of identiﬁcation was needed on a national level. Accordingly, during the release of this 2014-2015 period, operators used TROVAN ID-100A microchips to identify captive crocodile in the Tempisque area, thereby launching the new National Registry of Crocodiles. This national registry should, in future, be used by all the Conservation Areas of Costa Rica, as discussed in crocodile workshops that took place at the National University last December. Thus, at present, the ID number of the microchip implanted in the crocodiles left pelvic area, is recorded along with identifying scale patterns on the tail, with the goal of tracking the animal in future. The goal is to construct an ofﬁcial digital registry for the whole country, which could be accessed by researchers,

wild life ofﬁcials, and crocodile handlers in any conservation area. The registry contains the microchip identiﬁcation numbers and a series of other reference data, creating a useful data log to provide a resource for management issues regarding the crocodiles in the country. ACISA provided 200 TROVAN microchips for the initial project to take place this year. Ing. Agr. Fernando Estrada, general manager of the La Paciﬁca operation, provided a TROVAN scanner to read the microchips that are implanted. Due to the time pressures experienced during the second release, Dr. Mahmood Sasa, director of the Palo Verde station of the Tropical Studies Organization, donated a second TROVAN scanner and about 40 TROVAN implanters with microchips. 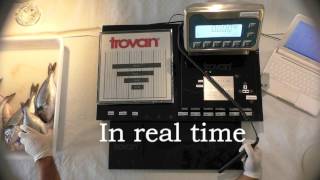